Although police body cameras have been around for almost a decade, they are still considered unknown territory by the vast majority of the population. This article includes interesting and relevant facts about police body cameras you probably didn’t know (but should)!

Most Law enforcement agencies prefer body cameras lenses of up to 120°. Anything above that will start to distort the image, causing the so-called fisheye effect.

Fact 2: People Behave When They are on Camera

In 2014, the first-ever study conducted about the effects of police body cameras found that citizen complaints dropped 88% among officers equipped with cameras. Body cameras successfully de-escalate situations because the public knows they are being recorded.

Not every department likes body cameras equipped with automatic night vision. Some want cameras to show only what the officer was able to see at the moment. Night Vision will always show more then what an officer actually saw. For example, a video recorded with night vision may show that the officer shot a suspect that was only holding a cellphone. To the officer, in the dark and under stressful conditions, he may have seen what looked like a weapon. It would be improper and unfair to show that video in court as the jury would not be able to accurately comprehend the difficult decision the officer had to make under the most stressful conditions.

Fact 4: Police Can’t Use Action Cameras Such as A GoPro

For a body camera to be considered law enforcement grade, it has to have non-removable SD cards to prevent tampering of recorded video, be able to record with just 1 press of a button or switch, and have its own docking station for charging and uploading files. It also has to have a secure mount that is both comfortable to the officer and easy to activate.

Although common sense tells us higher resolution is preferable, anything above 1080p is unnecessary for police body cameras. Higher resolution leads to heavier files and creates storage issues for departments. When it comes to video resolution, the sweet spot is 720p. It may be lower than 1080p quality but is still HD (High Definition) recording.

One of the main reasons police agencies purchase and wear body cameras is to promote transparency with the public. What would be the point of all that if an officer can simply delete videos from their body camera? Law Enforcement grade body cameras prevent officers from deleting files by having non-removable memory that is either password-protected, encrypted, or both.

Fact 7: Police body cameras are always recording but not really

Unlike action cameras, police body cameras have a feature called “Pre-Record” that ensures the cameras are recording at all times. This feature makes sure the body camera records all the action even if the officer forgets to turn it on. With Pre-Record, the body camera is recording in a 60-second loop. The camera continuously rewrites new video over the previous 60 seconds in a non-stop loop. This process is called “Buffering”. When an officer activates his camera, the previous 60 seconds are saved. In the event an officer forgot to turn on his camera, the pre-record feature allows him up to a minute to remember and activate his camera. Some police body cameras like the WOLFCOM Vision camera allows up to 30 minutes of buffering time. The Pre-Record feature also has a very low battery consumption rate when compared to a body camera that is on and recording normally all the time.

Body Cameras need a place to rest after a long day of recording. At the end of a shift, an officer simply docks his body camera into a docking station. Once docked, all videos are then uploaded into an Evidence Management System. Once the upload is completed, all data on the camera is deleted and the docking station begins charging the body camera for the next day’s use.

Imagine recording an average of 2 to 3 hours of 1080p video every single day, now multiply that by the number of officers in a department. The result is a massive amount of video, audio and image files in one single day. And how do officers manage all these digital assets? The best, most professional way is using an evidence management software (EMS). Most legitimate body camera companies offer their own versions of these softwares, which allow officers to tag, classify, edit, bookmark, delete and do much more with these files, saving departments a lot of time and resources.

Fact 10: Battery life is a bigger problem than you would think

One of the biggest obstacles holding back advancements in body camera technology is battery life. Battery technology has evolved slowly over the last decade forcing body camera manufacturers to build body cameras around the lifespan of the battery they intend to use. Police officers work long shifts that require extended battery operation. Emerging technologies like Facial Recognition, Live Streaming, and 4G/5G cellular connections require significant battery power. Body cameras that are being made to be smarter and working on an IOT environment demand high-capacity batteries to function for at least 12 hours. This poses a problem to police body camera manufactures. Making a body camera with a 12-hour battery life would result in a body camera that is too bulky. Making it impractical for police work. On the other hand, making a small lightweight body camera that’s comfortable to wear would result in a camera that has only a few hours of battery life. Not enough for an entire shift and also not practical for police work. These are the challenges body camera manufacturers face and, until battery technology evolves, cameras will only be limited to the power it can harness. 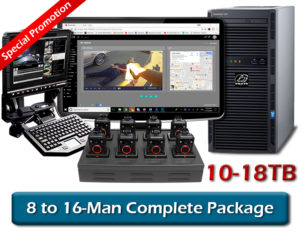