Watch the Presentation Video Below

The World's first 4 in 1 Multi-Purpose Multifunctional Device that provides these 4 main features: 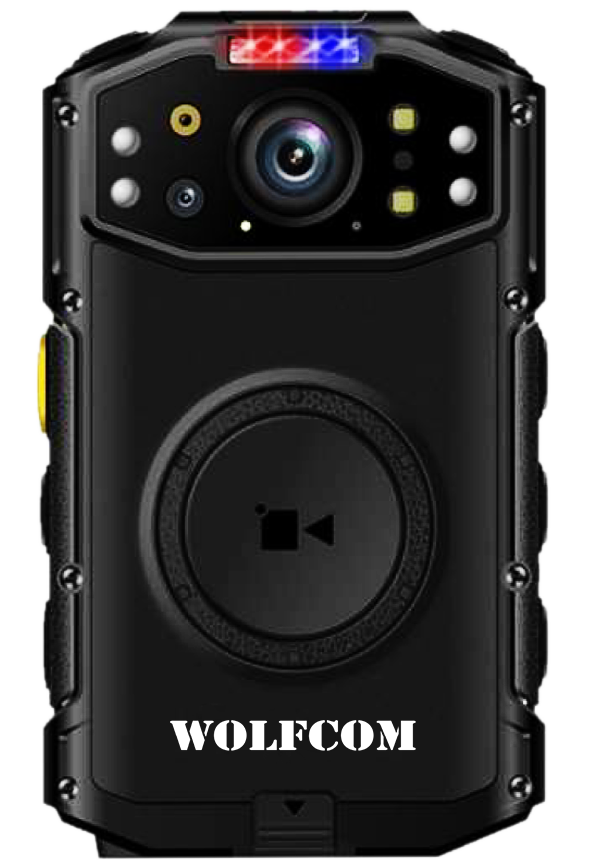 Since the introduction to Law Enforcement, body-worn cameras have merely been dumb Off-Line recording devices that only record audio and video. Our solution is a secure On-Line Smart IOT Body Camera that can be applied in various ways and in different scenarios, providing operators with valuable information to help make quick decisions on the spot. With an Android operating system, our body camera can sync with ATAK (Android/Tactical Assault Kit) systems. Soldiers that are injured can press an SOS button sending live video and GPS location to the Command center or fellow Soldiers within a group. Encryption on the body camera will prevent data from being retrieved and can be set to delete if the device was to fall into the wrong hands. With Facial Recognition technology, warfighters will have a body camera that can analyze the face of everyone they encounter and provide an

alert to the user as well as the Command center if there is a match. Our GPS body camera provides the user with a host of abilities that can help save lives, make better and faster decisions, and provide necessary information that will allow decision-makers to make critical decisions if a mission goes awry.

Do all the work on the field

Tag, Classify and Notate straight from the field using the touchscreen on the back of the body cam. Designed to save agencies thousands of dollars a year in overtime pay, officers can perform a "Quick Tag & Classify" or enter complete details of their interactions. Playback and review videos and photos based on the user's rights and privileges. At the end of the shift simply dock the 4G body cameras and all files are automatically sorted in the officer's profile on WEMS (WOLFCOM Evidence Management System). 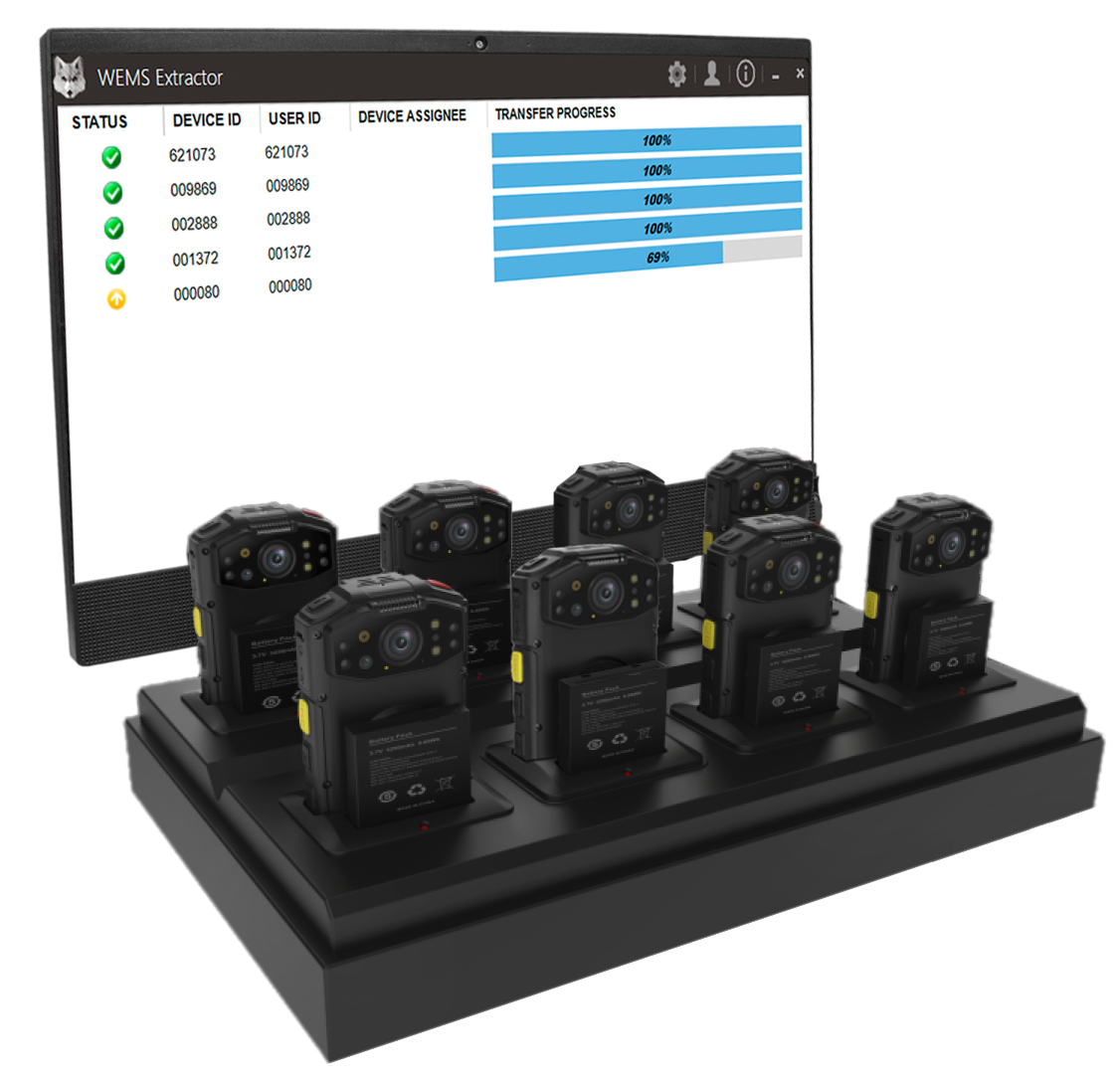 The Commander X2 Smart Docking Station takes body camera technology to a new level.  Able to connect through the network, the X2 Smart Station is used to dock the Commander. Once docked, the X2 automatically detects the camera and begins uploading videos to our (WEMS) WOLFCOM Evidence Management System or to the Cloud. Once complete the X2 proceeds to delete all data on the camera and begins charging it for the next day's use.

Subscribe to COPS (Commander Online Platform System), and you will be able to watch live video from any Commander camera when your officers are out in the field. In the event of an Emergency, Officers can activate our Emergency SOS Connect Feature. With a push of a button, the Officers Commander camera will activate a distress call and immediately send live video and GPS coordinates direct to Dispatch. Each Commander Camera can be tracked in real-time on a map. Using COPS, one camera or a group of cameras can Livestream back to Dispatch simultaneously. Communicate with each officer or a group of Officers with the PTT (Push To Talk) button.

All videos that have been uploaded through our X2 Smart Docking Station are then managed with (WEMS) WOLFCOM Evidence Management System. WEMS can be accessed from any computer on the network and has the following features: 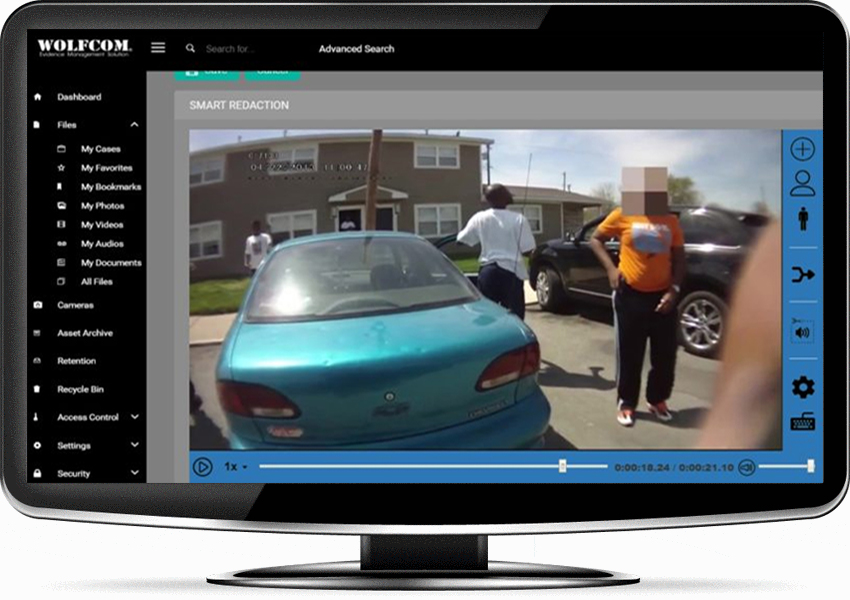 Keep it safe and sound and store it all on your premises. Our Customizable Workstation and Raid Servers all come with a 3-year next-day on-site service. Pair that with our exceptional Backup and Recovery service and you have a low-cost storage solution backed by the very best in the business. With WEMS Retention Policies enabled, you'll be able to custom tailor your storage with your usage. Easily share files with the district attorney on your Private Network. Access your video files from any PC on the network through our (WEMS) WOLFCOM Evidence Management System. 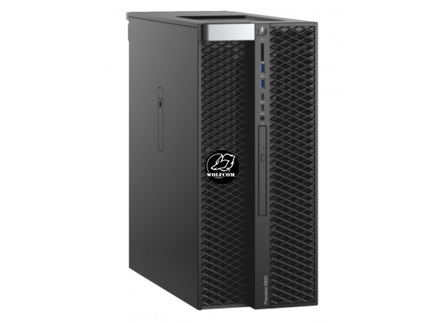 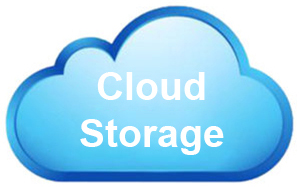 With our Cloud Storage Service, it's like having your own private server in the cloud. We'll do the heavy lifting and maintain everything. All you need to do is dock it and forget it. All video files are uploaded straight to cloud storage and secured as per CJIS regulations. Use any PC with an internet connection to log in and manage your files with (WEMS) WOLFCOM Evidence Management System. Best of all, we'll never charge you overages and there are no contracts.

In the event of a disaster, our Backup and Recovery service will restore all your data from backup files. All files, whether stored On-Premises or in the Cloud, are backed up daily. If you're purchasing our On-Premises Storage Workstations or Raid Servers, Backup & Recover is a very important add-on. If you are storing your data in our WOLFCOM Cloud, then no worries. We've got it all covered.

Try the Commander FREE. Apply for a FREE Trial

The WOLFCOM Evidence Management System is a complete software that helps users store and manage files of any type. It safely stores all your evidence in the cloud, so you can access them from any device with an internet connection without having to worry about hard drive failures or hacking attempts. This software is used by thousands of police departments, individual officers, and private securities all around the world. Through its intuitive interface, users are able to playback, view, tag and classify digital files, among many other features. 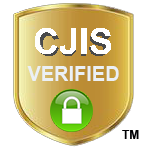 What is a CCI Number and Why is it Important?

The security and protection of Government own networks are of utmost importance in today’s world. A CCI number (CJIS Certificate of Integration) is issued to companies whose body cameras and In-Car video systems have been screened to be free of Malware and Viruses and Integrate seamlessly to CJIS Compliant Evidence Management Software.

All WOLFCOM Police Body Cameras and In-Car Video Systems have CCI Numbers and have been fully screened and integrate with CJIS Compliant Evidence Management Software.

Main Features of this camera:

The WOLFCOM Commander is Future Technology Ready. We designed our police camera to be ahead of its time and ready to integrate with future technology that either doesn't exist yet or is still in its infancy stage. This means it will be several years before the Wolfcom Commander becomes outdated.

The unit has vibration and audio confirmations when activating and de-activating recording.

The Commander features a Public Awareness Light (PAL), located on the front of the unit. The purpose of the PAL is to inform the public that they are being recorded. Designed to promote good behavior from the knowledge of being recorded, the PAL can be turned on/off according to the officer's or department's preferences. To turn it on/off, press and hold the Light Button on the side of the device for 2 seconds.

Advanced Pre and Post-Record with Audio

The unit also features configurable pre and post-record at 1080P resolution with audio. In the event an officer is under a stressful situation and forgets to turn their camera on at the right time, this feature will capture what happened before the unit was powered on, making sure nothing is left unrecorded.

The WOLFCOM Commander police camera features infrared LEDs for low light and nighttime situations. Night vision is configurable and can be turned on or off according to each department's policies. 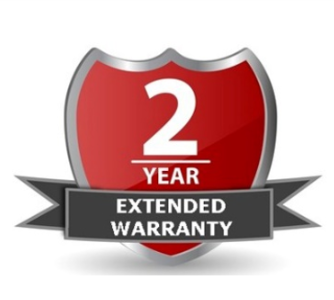 Extend your Commander warranty for a total of 2 years. When your camera gets old, send it back within 2 years for a free, brand new replacement.

WOLFCOM’s new Magnetic Mount allows you to mount your WOLFCOM Commander Police Body Camera anywhere on your uniform in a matter of seconds! The magnets are extremely strong, making it one of the most reliable body camera mounts in the industry! 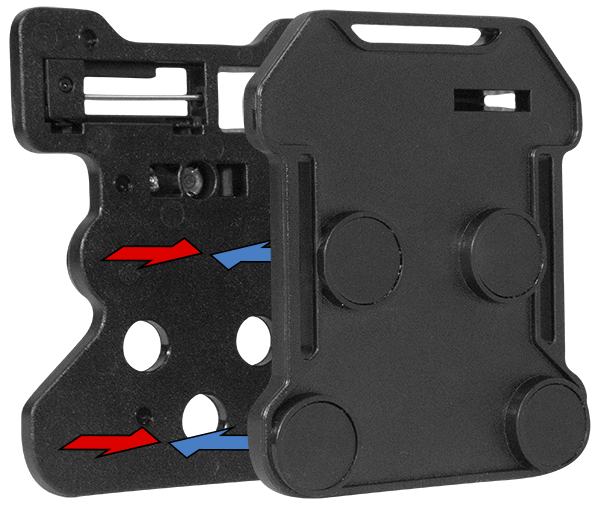 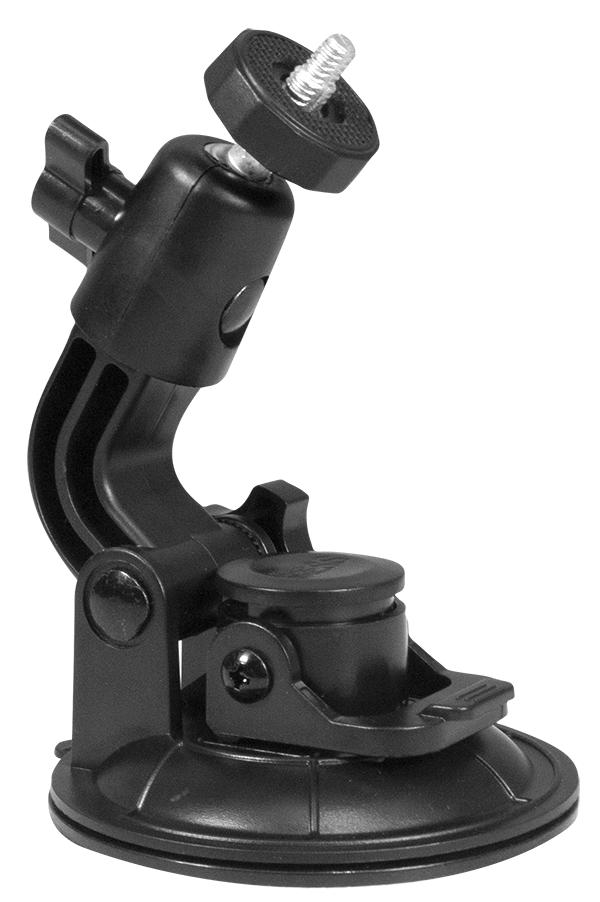 The WOLFCOM Commander can be turned into an affordable in-car camera with this easy-to-use suction mount. Simply attach it to the camera and mount it on the vehicle windshield.

Dispatch officers can watch live video footage from any Commander Body Camera while officers are out in the field.

The GPS location of each Commander Body camera can be tracked in real-time and displayed on a map.

The SOS Live Stream Connect feature allows officers to relay live video footage including their GPS location to the station in the event of an emergency. 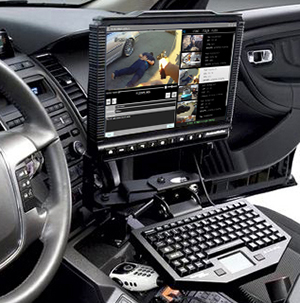 With our Mobile Client Software, your officers can tag, classify, and notate videos from the WOLFCOM body camera directly on the field. Saves time and saves money.

Our Mobile Client Application installs on your mobile data terminal. Police Officers can use the mobile app to tag video, classify, and write notations onto the body camera files. At the end of an officer's shift, when uploading data from WOLFCOM body cameras and In-Car cameras, all metadata will sync within the (WEMS) WOLFCOM Evidence Management Software. 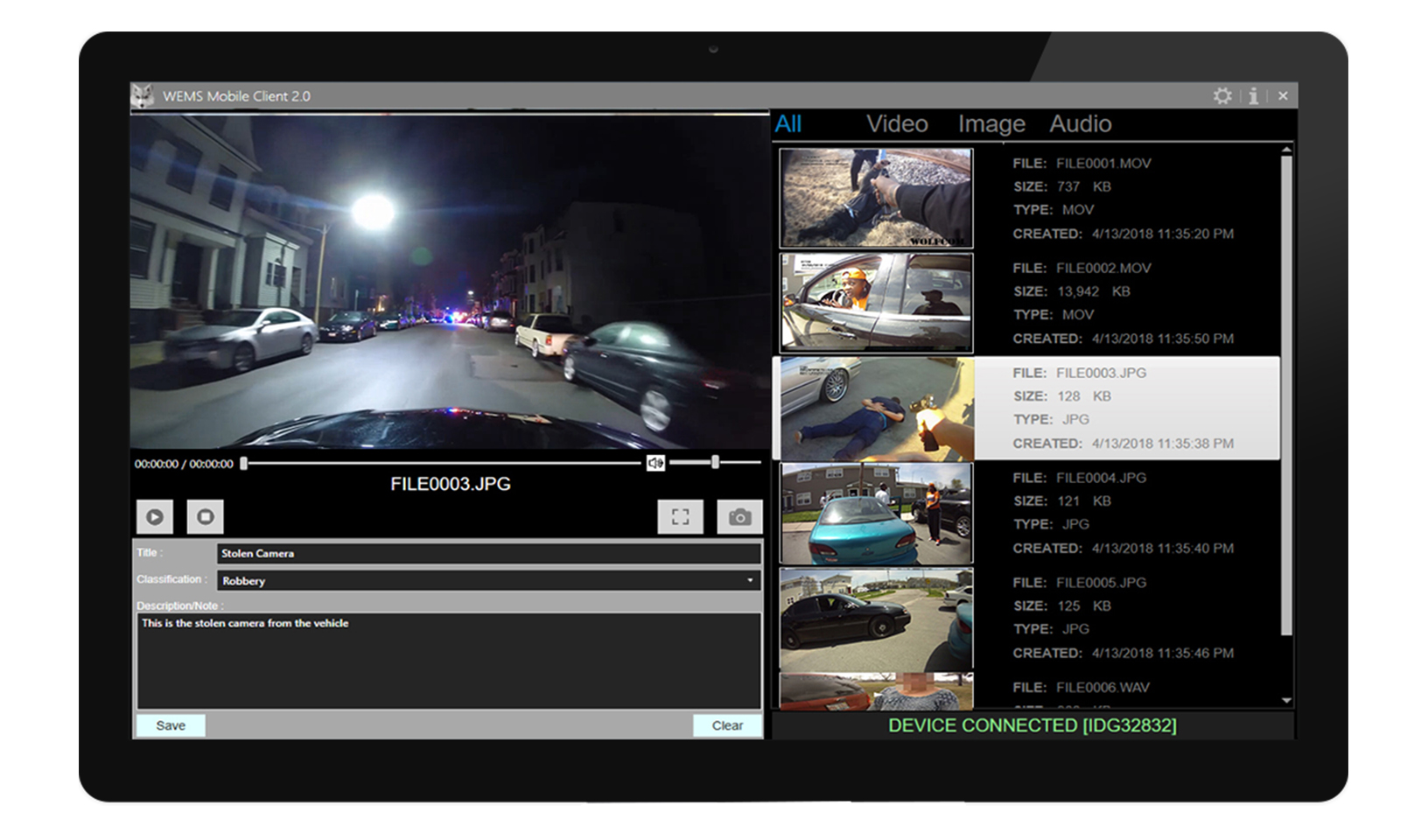 Try the Commander FREE. Apply for a FREE Trial

The WOLFCOM Commander incorporates GPS Geotag that stamps the longitude and latitude coordinates onto every video and picture file, frame by frame and picture by picture. When reviewing videos on our WOLFCOM Evidence Management Software, you'll be able to see the route of the video simultaneously on a map next to it and as the video moves, so does the dot on the map. This is valuable when reviewing videos of pursuits, as you'll be able to see the exact route taken as footage of the chase unfolds before you. The map can also be changed from regular map view to Satellite View showing actual photos of the surrounding areas taken by satellites in orbit.